The potential problem with Roth accounts is that you are taxed at your maximum possible rate today and not your average rate.  As a refresher, if you make $40K in taxable income and find yourself in a 25% tax bracket, that just means your last dollar is taxed at 25% but your entire income is taxed at about 15.5% on average. 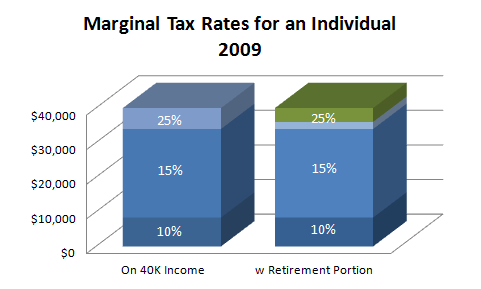 The money you commit to a Roth retirement account is considered taxed at your highest tax rate.

Over time the retirement money will hopefully grow.  At a 7.5% rate of return minus 2.5% inflation (to keep everything in today’s dollars), the money will double four times over 28 years.  Thus the Traditional has $64K or the Roth has $48K. 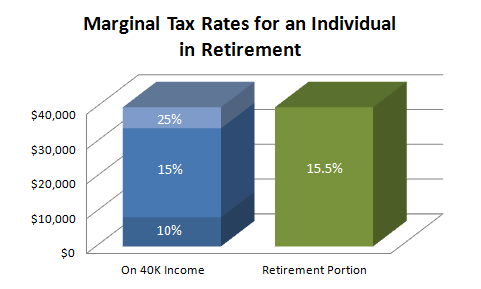 If your Traditional retirement account is your only income, then its average tax rate is less than your maximum rate.

This may not be the most likely scenario for everyone, but it is one that should be considered when formulating a tax strategy.  Although Roth makes sense for most people with many sources of future income (Social Security, House, Pension), make sure your retirement advisor considers what sources of income you will have at retirement.  If you have any questions post a comment and I’ll help you out.

If future average taxes are less than current marginal taxes, then a Traditional account may be better.