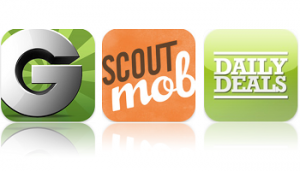 Saving money helps us make the most of the money we have no matter if it’s a lot or a little. Sometimes saving money may not be worth it if it takes hours to save a few bucks, but generally we all benefit from easy ways to save money and this can be done everyday.

Three Deal Sites that Save You Money

Lately, saving money has gotten much easier with the coming of online deal sites that offer steep discounts on a variety of activities including human favorites eating and playing. Most of the sites offer one great discount a day with no cost to you while others have ongoing deals. Best of all, many of the sites offer apps for iPhones and other devices so you always know what the deals are whenever you need them.

Here are three reviews of deal sites you will soon love.

is the first daily deal site I heard of and it leads the pack in great deals. Everyday you will find an amazing deal to a restaurant or activity in one of over eighty major cities. Often times the activity is limited in number and the best activities do sell out, but if checked early in the day you should be fine. You order an activity by prepaying the discounted price up front. After ordering in activity you have months to use the deal, but be warned that the fine print often forces you to wait a day to use it. Finally, to always know what deal is on right now, check out the GroupOn iPhone app which is free.

from Living Social is very similar to Groupon with the one deal a day format. There is also a LivingSocial iPhone app and this one lets you use the deal from your phone without printing out the coupon. It’s great getting two deals a day instead of one with this second service, but more cities will miss out for now as Daily Deals is only offered in 25 cities.

offers a slightly different service by stepping away from the one deal a day format and instead offering a large number of coupons every day. Scout Mob tends to focus more on restaurants but you may find a few other activities. The service also focuses on the cell phone, so you can either have a text with the deal sent to you from the Scout Mob website or download the Scout Mob app which will always tell you the closest deal wherever you are. The best thing about Scout Mob is that it is a bunch of free coupons and you can use them instantly so no planning way ahead. The downside is that is only in thirteen cities right now but should spread to more soon.

Do you know of any other daily deal sites I should list? Let me know and I’ll be sure to add them.